With Costa Rica’s most famous active volcano – Arenal – behaving quietly for the past three years, tourists to this Central American hotspot are looking elsewhere for exciting fireworks. 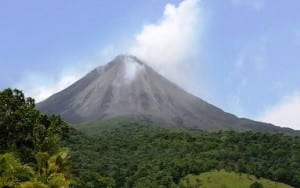 There are actually six active volcanoes in Costa Rica, and another 61 that are dormant or extinct. For the past 50 years, Arenal was the country’s most active volcano; however, in 2010, the celebrated cone-shaped peak entered a “resting phase” – meaning that its daily and nightly fantastic eruptions have ceased for the most part. While Arenal is still one of Costa Rica’s most visited sites, some of the country’s other active volcanoes are equally impressive.

About 3 million years ago, Costa Rica and its neighbors of Nicaragua and Panama were a volcanic archipelago rising from the sea in the “Pacific Ring of Fire,” an area of the world from Asia to South America infamous for its profuse volcanic activity. Fast forward to 600,000 years ago, and that’s when the geologic wonder of the Rincón de la Vieja Volcano was born. Located in Costa Rica’s northern Guanacaste plains, the giant cinder cone bridges the Continental Divide as part of nine contiguous craters in the Rincón de La Vieja National Park. 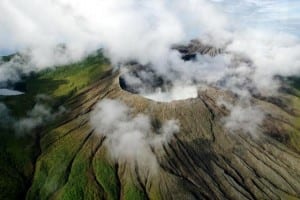 Rincón de la Vieja Volcano, whose name means “Corner of the Old Woman” from an indigenous legend, is the largest volcano in the country’s northwest region. Soaring 6,286 feet into the sky, its caldera is 9 miles (15 km) wide. The adjacent dormant Santa Maria Volcano stands even taller at 6,307 feet. The most active crater, called the Von Seebach, has near vertical sides denuded of vegetation near the top and frequently vents steam and gases. The last major eruption was in 1998. The mighty volcano’s activity once served as a natural lighthouse for ships at sea. 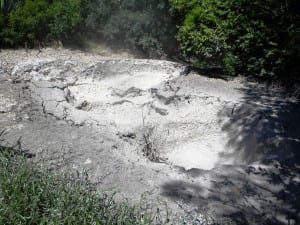 These days, visitors to Rincón de la Vieja Volcano are treated to quite a show. More than 30 rivers flowing down the mountainsides create countless thermal springs and waterfalls. Walk the easy 2.5 mile loop trail in the National Park’s Las Pailas (“The Cauldrons”) section, and you’ll witness firsthand the explosive steam vents, boiling volcanic sulfur-water pools, and striking bubbling volcanic mud pits. There is a very challenging 6-mile (10 km) hike ascending 5,000 feet to the top of the active crater, however most of the time the trail is closed due to the crater’s high activity. 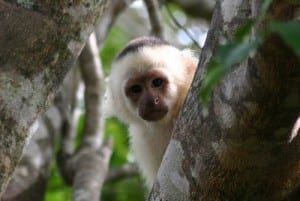 variety of flora. Its high forested slopes are home to gnarled dwarf trees draped in moss mats that provide the arboreal base for orchids and epiphytes. You can find numerous “Guaria Morada” (purple) orchids, Costa Rica’s national flower; and in the thick dry tropical forest is an immense 800-year-old Ceiba tree. Wildlife is plentiful. Rincón de la Vieja counts 300 bird species, including the Crested Guan, Blue-crowned Motmot and Emerald Toucanet, as well as a variety of mammals such as collared peccaries, agoutis, nine-banded armadillos, white-nosed coatis, raccoons and three species of monkeys (white-faced Capuchin, howler and spider). 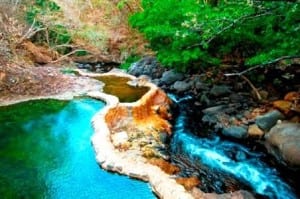 Hacienda Guachipelín offers guided hikes in the Las Pailas sector of the Rincón de la Vieja National Park. The Park Ranger Stations at both the Pailas and Santa Maria sectors of the Park are open daily from 8 a.m. to 4 p.m.

* Arenal Volcano (National Park) in the Northern Plains had a massive eruption in 1968 that destroyed the surrounding town. Since then, it has been Costa Rica’s most active and most visited volcano; its hot springs are world famous.

* Irazú Volcano (National Park), in the Central Valley above Cartago, is the tallest at 11,260 feet, with two calderas filled with water and rising steam.

* Poás Volcano (National Park), in the Central Valley above Alajuela, is one of Costa Rica’s largest and most active volcanoes. Although the last major eruption was in 1910, Poás still regularly gives visitors a show with geysers of steam, gases and water from its crater acid lake exploding into the air.

* Tenorio Volcano (National Park) in Guanacaste is known for its hot springs and the beautiful Rio Celeste, whose sky blue waters are caused by volcanic minerals mixing together.

* Turrialba Volcano (National Park) in the Southeastern Highlands had its last major eruption in 1868; however, smoke and gas explosions have increased over the past couple of years, and today volcanologists maintain a constant vigil.